We have two adorable kitty fur babies that we don’t really consider your stereotypical cat. They’re really more like dogs or furry humans than anything. They play fetch, come when they are called, snuggle, and are really well mannered and friendly. One is exceptionally large. Not fat, just a really, really big cat. The other is averaged sized, okay, maybe she too is a bit big for a female cat. I guess somehow the tiny kittens we pick always wind up gigantic. Anyway, as wonderful as they are, we’ve gone through a few rough patches. Unfortunately, I’ve Googled “why is my cat peeing outside the litter box” too many times for comfort but it’s basically made me an unofficial expert on cats, their pee, and litter boxes. So yes, I’m writing a blog on cat pee and litter boxes but hey, you googled something along the lines of “why is my cat peeing outside the litter box” so, you’re welcome. 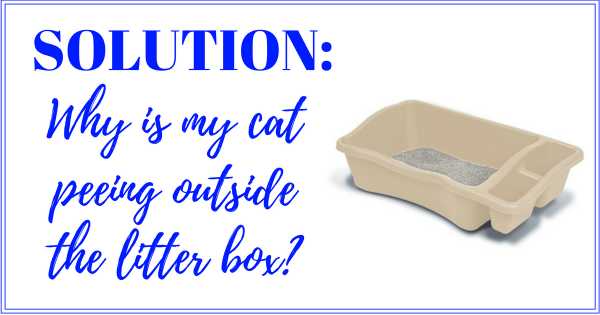 So, why is my cat peeing outside the litter box?

Let’s break down the main reason your cats peeing outside the box, my experiences, and the super simple solution I found to fix them all!

Stress and Psychological Issues in Cats

If your cats peeing outside the litter box, I mean randomly around the house, it’s most likely a psychological issue which is often harder to remedy.

I had our big orange cat, Oliver, for about a year when I got our little{er} black cat, Zooey. She was only about 3 months old and Oliver was very dominant and very possessive over me. After all, it had just been the two of us for his first year and Ollie liked it that way. You’d think this is where the peeing began, but no. A month later I {re}met my now husband (high school classmates that reconnected at our 10-year reunion). The more Nick was at my house the more Oliver started to act up. I’m not sure if it was just Nick coming around or if the addition of a new cat and a new person at almost the same time was just too much for him. Well, a couple months in and Ollie was just not having it. He started peeing outside the litter box, in my laundry basket. Eww. Turns out he was marking his territory. A “this is my mom, get your own” kind of thing. There was almost nothing I could do in this situation other than getting rid of Zooey and Nick and that wasn’t an option. Thankfully that didn’t last very long once he realized they were both here to stay. Now we look back at it and laugh at the ridiculousness of our cat. He also loves them both like crazy. 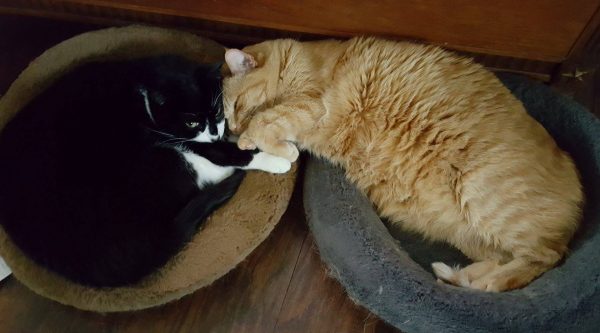 Fast forward about a year and Zooey, our little princess, decides she doesn’t want to use the litter box anymore. No changes to the household but she’s choosing to pee outside the litter box. I mean I caught the cat peeing NEXT to the litter box. Like literally right outside of it. UGH. Even worse, while trying to figure out a solution to Zooey’s problem, I randomly see Ollie standing in the box but missing it completely.  He’s in the box but he’s so big he’s actually missing the side and peeing on the floor. After Googling what causes cats to urinate outside of litter box about a hundred times and trying everything I could for my two different issues (We cleaned it constantly, bought a new clean box, bought a litter box with a lid, removed the little litter catching mat outside it, scrubbed the floor around it, everything) I discovered the solution. The Petmate Giant Litter Pan.

The solution to why is my cat peeing outside the litter box:

The Petmate Giant Litter Pan was our last ditch effort and turned out to be a sanity saver for us. Before putting it down we made sure to scrub the floor with a bleach solution (rising really well) to hide any previous urine smell. We also removed anything that was catching litter outside the box which might confuse the cats into thinking that was also a place to pee. We then put down this new giant litter box and like magic, we never had another problem. A lot of cats don’t like climbing into a covered litter box. Ours HATED it when we tried the covered option. Other boxes are just too small. This giant litter box is the best of both options. It has tall sides to keep the pee and litter in but it’s large and open so they don’t feel confined. It’s large enough to accommodate our huge cat and his strange peeing style so he no longer misses the box, and the large size means there is more room for Zooey to avoid the dirty spots, which she loves. Since buying this litter box we also bought a new home. This can often cause problems with cats peeing outside the box (psychological/stress issue). As long as we keep up with cleaning the box at least every other day there are no issues with our cats peeing next to the litter box. Score! The reviews on Amazon don’t lie (and neither do I)!

Other reasons your cats urinating next to the litter box:

Multiple Cats in the Home

Having multiple cats using one standard size litter box can also cause problems with cats peeing next to litter box. Often cats don’t like to step where other cats have gone to the bathroom. The suggested solution is to buy multiple litter boxes and have them in various places in your home. I know people who do this and with good results. I, however, am not open to a house full of litter boxes. This again is where the giant litter box came into play. Because of its large size, it solved the issue with Zooey not wanting to step where Ollie had already gone. 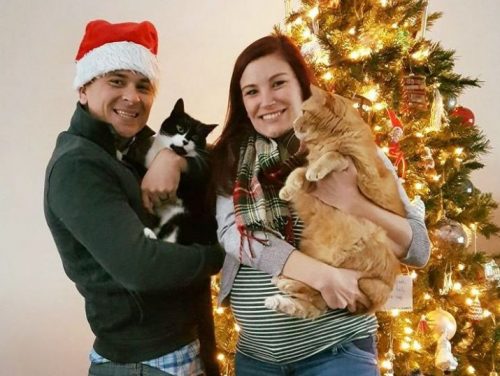 Cats peeing next to the litter box can also be due to a medical problem where they can’t hold their urine. This is different than a kitty UTI. With a urinary tract infection, which now that I think about it, we also had with Oliver, they try to pee constantly and everywhere, not just next to the litter box. They often pee blood and it’s clear they are in pain. If you suspect either of these issues you should seek medical attention.

So, why is my cat peeing outside the litter box? There are a lot of possible reasons why. If nothing has changed in your household and they don’t appear to have a medical issue, I highly recommend trying a large litter box without a cover. I honestly never would have thought it would make THAT big of a difference. But really, it shouldn’t shock us kitty parents that our little diva pets like the biggest and the best!

Is your cat peeing next to the litter box?

What solutions did you try and did they work? Did you get the Petmate Giant Litter Pan and love it as much as we do? Let me know in the comments below!