Hello, second trimester!! For me, it’s the best part of pregnancy by far. The exhaustion, nausea, and major miscarriage concerns are dwindling and I’m feeling, dare I say, “normal” again! Honestly, I feel like I don’t have a ton of updates which I suppose is a very good thing! Today, I’m touching on how this pregnancy is different from my previous, cravings (which are in full force!), movement, doctor appointments, and my 20 week ultrasound and anatomy scan! Exciting things, people! Thanks for following along on my second trimester pregnancy journal, weeks 14-20. 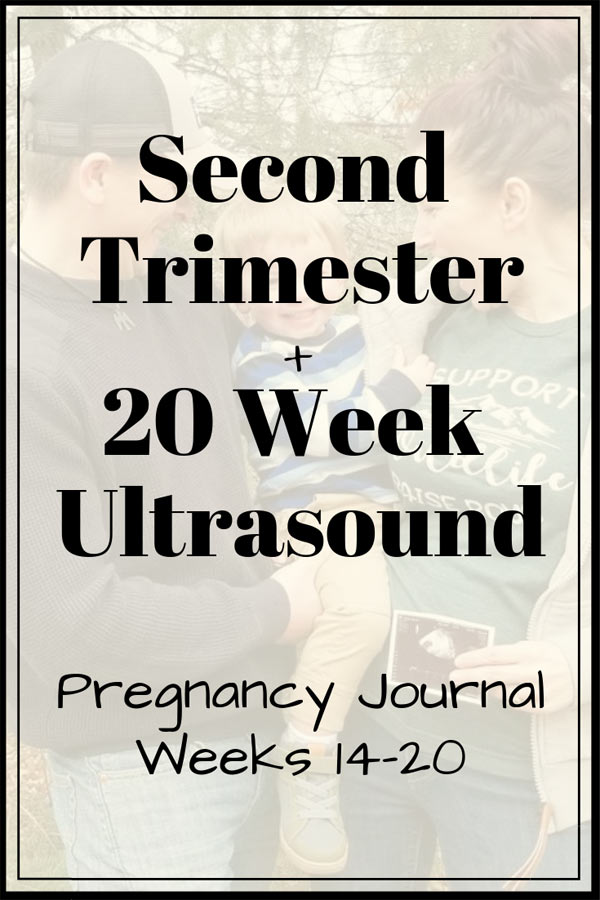 The biggest change from my first to second trimester pregnancy symptoms is definitely the return to feeling almost normal and being full of energy. I actually want to get up and get things done. That’s far more than I can say for the first trimester.

At the beginning of the second trimester, I was sleeping pretty well and feeling rested in the mornings. As I progress, sleep is getting more and more interrupted at night. I’m a side sleeper but for some reason, with this pregnancy, I find myself wanting to sleep on my back more and more. Unfortunately, you’re not supposed to sleep on your back starting in the second trimester because your growing uterus can restrict blood flow back to your heart if you do. So, I’m sleeping on my sides mostly but the bigger the bump gets, the more you need to move at night to get and stay comfortable. The good news is, even when it’s a rough night, I still feel like I can get things done during the day.

Pretty soon I’ll probably be sleeping with an extra pillow (or 5) to help with sciatica and comfort. I know a lot of people love the Snoogle pregnancy pillow and swear by it but it was a little too big for me. This time around I might give a wedge pregnancy pillow a shot. Let me know if you have one and like it.

Second Trimester Pregnancy Cravings: Give Me All the Food

Another of my major second trimester symptoms is food cravings. I’m a food person. I love it and I crave things even when I’m not pregnant. I actually hate planning meals in advance because I rarely feel like eating what I planned. It’s always spur of the moment which is totally intensified during pregnancy.

Most of the time I simply crave my favorite foods, Mexican, pizza, burgers, and appetizers/snacks. At about week 16 though, I started getting pretty random cravings. The weirdest craving I’ve had so far is roasted lemon pepper broccoli. I mean, I like broccoli but I ate a huge family size bag of it in less than a week and that is very weird for me.

A few other cravings I’ve had recently are, clementines, lunch meat (which I can’t have and it’s making me CRAZY!!), pizza rolls, mac ‘n’ cheese, what we like to call “junk burgers” (flat top grilled, gooey American cheese, pickles, bacon, onions, ketchup, and mustard), and shockingly because I haven’t had it in probably 10 years… Taco Bell, ugh, yuck. Not sure if I’ll cave on that craving.

Now, at 20 weeks, I’m just basically hungry all the time. I’m trying to eat a lot of small, at least semi-nutritious things throughout the day to curb the hunger, but it’s a battle. The other key is drinking lots and lots of water. When I feel hungry, I drink some water first. It’s actually becoming a good reminder and way for me to stay hydrated.

So, one of the things that seems to differ from my last pregnancy to this one is how quickly I’m showing even though I’ve gained the same amount of weight. My OB said it’s generally because your body remembers what it’s supposed to do, your uterus expands a bit quicker, and your ligaments that hold everything in stretch out easier. I’m really hoping that doesn’t mean it’s harder to get back to pre-pregnancy size but I feel like it does. Someone give me some hope here!

Another one of my second trimester pregnancy symptoms that seems different from last time is how early I felt movement. I know some people will tell you they felt their baby at 8 weeks, well I’m not one of those. My doc said around 14 weeks is more likely with the second pregnancy and closer to 18 with the first. Everything before that is likely just gas because that’s another GLORIOUS pregnancy symptom for most women. I definitely felt this little guy earlier than the last. Even my husband could feel him moving by around 16ish weeks this time!

With my first full-term pregnancy with my son, I had a lot of appointments and ultrasound. Like, A LOT. By 20 weeks I think I had had 6 ultrasounds in addition to about 7 OB appointments. I was very up-to-date on his growth and how things were going. The complications were stressful and scary but it was nice to be able to see the progress and that everything was okay. This time around, I’ve had a much more traditional appointment schedule and while I’m glad for the “normal” uneventful pregnancy, I do miss the reassurance of the million appointments.

The best thing to cure this is our fetal doppler. I used it every couple weeks before I could feel him moving around just for reassurance. Now that I can feel him practicing karate in there (or Unagi for my fellow FRIENDS fans), I just try to lay low for a bit every day to make sure he’s still going crazy!

I had my dating ultrasound at 7 weeks and waiting until 20 weeks to have another ultrasound was like a dull but cruel form of torture.

But, 20 weeks came and just this past Monday we had our 20 week ultrasound and anatomy scan! As you may know from my previous post Pregnancy after 35 + Counsyl Test: Pregnancy Journal Weeks 9-13 we found out the gender from a genetic test at 11 weeks. If you didn’t read it yet, spoiler alert, it’s a boy! We found out at the 20 week ultrasound that these genetic tests actually have been wrong but it only happens when they tell you it’s a girl because it’s possible they were looking at the mother’s genes rather than the child’s. In our case, since they told us it was a boy, the chances of them being wrong are basically 0 since I am not a boy and the male gene was floating around in there so it’s got to be someone’s!

What Happens at the 20 Week Anatomy Scan

They did indeed confirm it’s a boy, and everything looked great! They took pictures and measurements of his entire body, organs, and all his limbs. He’s growing proportionally, and just a couple days ahead of schedule. At the 20 week ultrasound, they also ruled out several things like cleft lip/pallet and spina bifida. They can see the chambers of the heart and anatomy of the brain and if the diaphragm, kidneys, liver, etc. are in their correct places. It’s probably one of the coolest parts of pregnancy.

The 20 week ultrasound is really interesting because they also look at the uterus, amniotic fluid, placenta, and umbilical cord to make sure they are all positioned correctly and functioning as best as they can. They can generally also determine if you currently have placenta previa where the placenta partially or fully covers the cervix. Thankfully, everything looked good and there were zero concerns at our 20 week ultrasound!

I’m so excited to be halfway there! Pregnancy is not my favorite since I am what you might call a “leader/control freak” and pregnancy definitely limits that. But this little nugget is already so loved and we can’t wait to meet him. Well, we can, stay in there for at least 18 more weeks little guy! Another bonus this time around, it seems to be going by a lot faster and I really hope that feeling continues! In the meantime, we are soaking up every minute with our only son before life gets crazy and he becomes a big brother!

Until next time, on to the rest of my second trimester pregnancy: weeks 21-27! 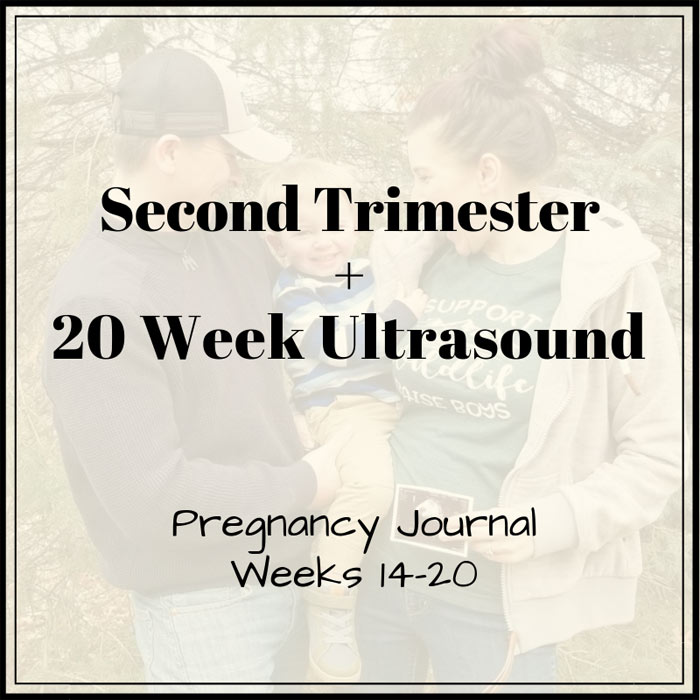 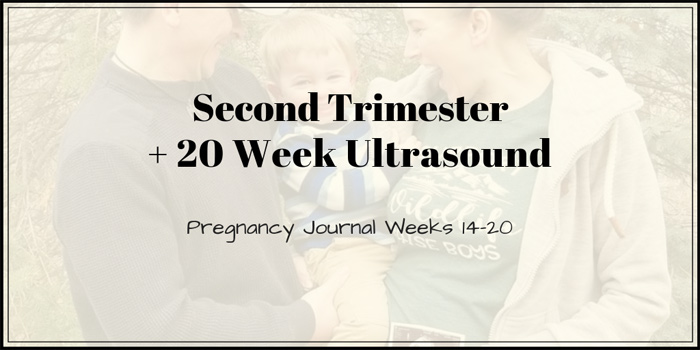